KOCKS is an independent, medium-sized family business with a great tradition. Since 1946 the name KOCKS has stood for innovation, quality and reliability.

The range of services offered by KOCKS includes consultancy, planning, development, construction, delivery, assembly and commissioning of rolling mills (for pipes, wires and rods) as well as the conversion and modernization of existing installations.

The company has now invested in unmanned manufacturing and therefore also in the future by using two robot automations.

"After some consideration, the investment in modern, cost-effective manufacturing was required in order to exist in the market,” said Carsten Aeilts, Managing Director. However, a threshold still exists for some employees and people are still a bit cautious about gaining work experience with the system(s).

After the advisory discussions by the trained staff of Mager & Wedemeyer and a number of visits, the company immediately invested in two RoboJob robots: one of 20 kg for an existing CNC lathe and one of 165 kg for a simultaneously newly purchased large Mazak turning/milling centre.

Aeilts states: “Based on the small batch sizes, it was important to be able to programme and equip quickly and easily. The RoboJob company was the one that most satisfied these requirements. Another important criterion was that the machine did not have to be covered, so that the accessibility for our components was fully retained. Also useful are the various extension options, from the standard stacking table for feed and shaft components, via working from a pallet to stackable pallets, which our robot can stack independently in order to also finish larger numbers even with large workpieces.”

“The small robot was set up, installed and instructed in June 2015 within 3 days. In the meantime, the machine on which this Turn-Assist 250 was installed has been replaced by a new Mazak Integrex i400. The robot was given a new "partner" because it was now installed on a new Mazak. Our large robot was installed on a Mazak Integrex E 500 H II in March 2016. This combination is still running. Production works in two shifts every day, and thanks to the robot, it is also possible to work unmanned at night. This machine achieves no less than 5,100 spindle hours per year. With our small robot, we achieve 4,200 spindle hours per year.”

Aeilts also looks back with satisfaction on the project-related approach of RoboJob: “Together with RoboJob, we have developed a new axis gripper for our large robot. For this, our purchaser worked with Mr. Müller from Mager & Wedemeyer and with Mr. Jelle De Roovere from RoboJob. On our side, we made it clear what our goals were, and RoboJob immediately made it clear what was possible and what was not. Then RoboJob, with the support of a Kocks engineer, built a gripper that met our requirements. We built the gripper fingers ourselves according to the RoboJob guidelines. I am extremely satisfied and proud of the end result: our large robot has an actual load capacity of 130 kg. The axes that we load with the robot weigh no less than 110 kg. These are loaded into the counter spindle, then processed and then unloaded with the robot. In the past it took 70 working days for the ashes to be completely finished in our production, now we only need 18 days. We were also able to reduce the cycle time by 30%. ” 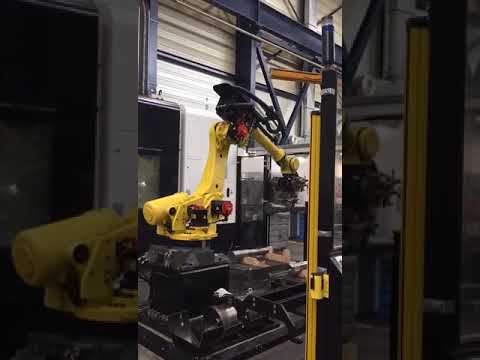 In this video, you will see how a RoboJob robot loads and unloads shafts of 110kg into a Mazak Integrex E 500 H II. By automating this process, Kocks Manufacturing has managed to decrease the cycle time with 30%.